This past week, People Magazine -- also known as The Big Book of Pictures -- named Matt Damon its annual Sexiest Man Alive. Far more important, however, was the ranking on page 144 wherein they included Nathan Fillion in their "Domestic Bliss" section, which was nestled between their Men in Sexy Places section and their Sexy and Shirtless section, neither of which I looked through seven or eight times.

There are two significant facts you should know about Nathan's inclusion in the "Domestic Bliss" section. One, he gave the best quote in the whole magazine: "There are black widow spiders in my backyard, coyotes walking down the streets, killer bees, rattlesnakes -- there's so much around L.A. that'll kill you!" And second, his glamor shot was one of the worst Photoshopped images I've ever seen. Don't the editors of People Magazine know the cardinal rule? You don't Photoshop Nathan Fillion's face. In fact, I'm fairly certain that was one of the original Ten Commandments: When thine Canadian Nathan Fillion appears unto you, thou shalt not ruin his prettiness with thine Erase tool.* Right?

In order to defray the sadness of the poorly Photoshopped Nathan, The Park Bench is naming him its November Nerd Man of the Month. We have bestowed this honor upon him for other significant reasons as well including the fact that:

He can fly a space ship. How cool is that? 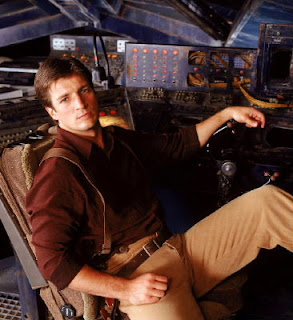 Okay, he might not actually know how to fly a space ship, but I bet he knows people who can. 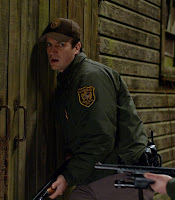 And most important of all, the man's damn funny. Just check out his three faces of soap opera acting:

For all this and yes, for his ability to wear tight pants, we bestow our shallow Park Bench love on Nathan Fillion and welcome him to the Nerd Man pantheon.

*The rule was amended years later to read: Thou shalt not Photoshop Nathan Fillion unless it's to make it look like he was your date at the senior prom. As the Pope said at the time, "That's just common sense."
Posted by Liz at 7:27 AM

Hotchie wah wah, how has he missed being NMotM before?! The Firefly pic is dreamy...

And lo there was a Firefly / Serenity marathon on Thanksgiving day...

D'oh! I can't believe I missed a Thanksgiving marathon. I spent the whole day sick. That would have been perfect.

I have yet to see the People mag photo of Nathan Fillion. But I agree, what sort of sinner messes with pure perfection?! Shame! Shame!

Nathan's best trait though? The man is SO. VERY. FUNNY. and very quick with the funny too. I love that!

Joss Whedon & Nathan created the most perfect hero ever in the character of Mal Reynolds: handsome, rugged, handsome, flawed, handsome, decisive. And did I mention handsome?

I agree wholeheartedly. All you have to do is watch the outtakes on either Firefly or Slither, and you can tell he's just naturally hilarious. He may well be my favorite Canadian of all time. :-)

I haven't seen the pic yet either...but I can't for the life of me figure out how anyone would even THINK that Nathan needed 'altering'!!

One of the best pix of Nathan floating around the web is one that was taken 'by the bushes' at Universal when Serenity was filming...a PA took it of him and my daughter (she is cropped out of the shot seen on the net) at the fence...taken with a disposible camera, and he is just downright GORGEOUS!! The man needs no 'help' in looking good.

Thanks for acknowledging what fans, flans and Fillies have always known!

Down with mags that alter who you are. Grrr.
Especially Mr. hottie himself.
Oh, the shame!