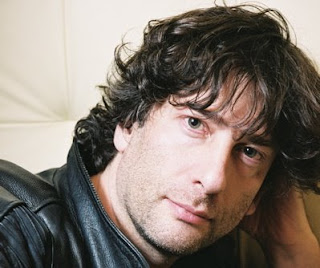 Saucy AND literate!
Okay, ladies, I'm going to come right out and admit that I've only just begun my Neil Gaiman education. So, much as I was with David Tennant's Nerd Man recognition, I'm pretty much a neophyte singing the praises of our authorial honoree this month rather than a seasoned acolyte shouting my encyclopedic fan knowledge from the rooftops. So please bear with me as I shakily tip The Park Bench's nerdy hat in Mr. Gaiman's honor. Please bear in mind, too, that I'll be counting on you to fill in all the things I've missed.

Right now, I'm nose deep in "Fragile Things," a wonderful collection of Gaiman stories that merges Murakami-esque surrealism with a dash of Tim Burton, a wee bit of Stephen King, a smidge of Charles Addams and an ethereal, delicate sensibility purely and totally Gaiman's own. And yes, with each turn of the page, my literary crush is growing. This guy deserves recognition -- well beyond a Park Bench honor -- simply because he's a brilliant writer with a mind that brings wonderfully unimagined worlds to life.

Gaiman's collection of work extends well beyond my toe-in-the-water reference to "Fragile Things." He's probably best known as the author of "The Sandman" comic books, a number of children's books including the recent "The Graveyard Book" and "Coraline" which has been turned into a stop-motion film set to debut in January. He's also set to pen the end of Batman for DC Comics in 2009. But perhaps most impressive of all, his first book was a biography of Duran Duran. The man has documented the life of Simon LeBon! Nice.

Happily, Gaiman's nerdy goodness extends even beyond his way with curious plot lines and disturbing imagery; he's also got a fabulous journal that is instantly addictive from paragraph one. It's a compelling, funny and earnest account of a writer's life, like a less-mannered John Hodgman blog but with bigger words and fewer references to hobos.

Neil Gaiman is the best kind of nerd. He's smart, funny, literate, has a passion for his work and knack for blazing new paths. And he wrote an episode of "Babylon Five." In short, chicks like intelligent men and this guy uses the OED and the magnifying glass that comes with it, so let's all do the math here: Gaiman is the geeky ideal and that's why we're pleased to name him our November Nerd Man of the Month.

Now if you'll excuse me, I have some reading to do.

ETA: Thank you to Ruth for the suggestion!
Posted by Liz at 7:39 AM

Love it! NG is nerdy, intellegent and all around delicious- great choice!

You should read Stardust and American Gods- great books.

I want to bear his children.

I also heartily recommend Good Omens, which Gaiman wrote with Terry Pratchett. It is one of those enduringly funny books that I go back to every couple of years. Also, if you're into comics (or even if you're not), Sandman is an excellent choice.

Gaiman has been a favorite since one of my closest friends handed me Good Omens many years ago. It took me longer to get into the Sandman series, but now I'm hooked on anything he does. In addition, if you haven't listened to him read his own work -- Wow! Most authors who read their own work, well, shouldn't. They don't sound like our imaginations. Gaiman sounds better. And I have a pretty good imagination.
Great choice!
Libby
notesgirl.com

Excellent, excellent choice. I'm a huge fan of his, and have been for a long time. He's a must-read writer for any discerning Nerd Gal.

Also, he may be in talks to write an episode of Doctor Who - which would make this fangirl's heart explode with squee!! :P

I third the recommendation of "Good Omens". I also suggest "Neverwhere" and "Anansi Boys" (far more light-hearted and fun than it's sort-of-prequel "American Gods"). "M is for Magic" is also a nice mixed collection of short stories.

And libby is SO right about hearing him read. I had the privilege of going to a reading/signing he did for "Anansi Boys" and I was rapt...

Oh and what are the criteria for selecting a Nerd Man of the Month? Because I'd like to suggest Bill Nighy, but I don't know if he'd fit although he's done some SF&F films...

OMG yes!!! I have read pretty much everything he's ever written. I love that he never writes anything that's comfortable to read - his works are funny, entertaining, and can even at times be quite endearing. But you never walk away from his books looking at the world quite the same way you did before. I'd say he deserves the award just for creating Death in the Sandman comics, the coolest, strongest female lead I've ever read.

"Everyone wonders what happens after you die. And in the end, everyone finds out."

Yes, good choice! Once you've finished Fragile Things read Good Omens, then go out and read The Sandman. READ IT! :) And Stardust and American Gods and Neverwhere and Anansi Boys, etc. etc.
I've had the pleasure of hearing him read twice. Once at a book signing for 'Wolves in the Walls' (I got a photo with him and went so badly fan-girl on him that I 'leaned into the picture and ending up clonking him on the head - he was extremely gracious about the whole thing) second time was a radio interview for Anansi Boys - it was done in front of a live audience and I managed to snag tix!

I love Neil Gaiman! I mean, I'm obligated to find him sexy since he has an English accent but so nice that he's also talented and gorgeous. My favorite is a tie between Good Omens (hysterically funny) and Anansi Boys (poor Charlie!). I like that he's not tied down to any one medium. His style is always fun to read no matter what.

Great choice for Nerd Man! Yes, add my voice to the growing chorus here. I highly recommend American Gods, Coraline, and Neverwhere. If he does indeed pen the rumored Dr. Who episode, I may be lifted bodily into paradise.

Amen to the Neil Gaiman love, not only is he way cool generally, he also keeps bees (which for some reason I find fascinating).

Good Omens is definitely one of my go to reads when I'm feeling a bit out of sorts.

Sandman was actually the first comic series I read. I was on the young side, and didn't know about this whole "comics can contain adult material" thing, so I was a little shocked at first. I didn't know about the "comics often come in a series and should be read as such" thing, either, so I started with the second-to-last collection. (Which happens to be the climax of the series. But I thought it had the prettiest pictures, you know.) Still, I managed to get hooked, (both on Gaiman and on comics) and it was interesting in itself to read the series from the beginning and see how all of the plot threads came together. So, so many threads. The man's good with weaving.

I, of course, second most of the above suggestions, but would also throw in the short Death spin-off comics. (Not sure if you have to read Sandman first... it would probably help.) And I think my favorite thing he's done is a short John Constantine comic called Hold Me. I mean, really short... but lovely, and illustrated by the fabulous Dave McKean. It can be found the in Midnight Days collection.

He keeps Bees? Just when I thought he could not get any more weirdly wonderful....

One more little comment on Sandman. I am an old geek and was turned on to Sandman by my then teenage daughter. Once I got to the story about Shakespeare (the Midsummer Night's Dream one) I was completely hooked( well, actually somewhat before that but that one was very special). I still think the last three stories of the last book ( The Wake) rank with some of the most beautiful things I have ever read. I get goose -bumps just thinking about them. Of course, though, you absolutely can *not* skip ahead. It would be wrong.

"It's about the soul of America, really. What people brought to America; what found them when they came; and the things that lie sleeping beneath it all." -Neil

The audio version of Anansi Boys is narrated by Lenny Henry and is amazing! His voice and the Jamaican accent he does are so perfect for the story. It's magic. :)

Excellent choice!
I was directed over here by a friend who knows of my love for all things Neil.

If you don't mind the occasional dark theme or graphic graphics, Sandman is an absolute must-read for anyone interested in Gaiman (you do need to read them in order). I can literally point to books on my bookshelf (mythology, American history, world history) that I bought because of a Sandman story arc. And yes, Gaiman's Death is probably my favorite fiction character ever written. She is amazing!

Gaiman also wrote 1602 for Marvel comics - with modern day Marvel characters set in 17th century England. Nice. And then there is Stardust, which was made into a movie that, surprisingly, did not suck. Those are my favorites but I do need to pick up his latest to read. Sorry to blab but there is so much good to be said about Neil Gaiman!

Nth-ing the recommendation for his books. I'm reading The Graveyard Book right now and can't wait to see how it goes.
I've been a reader of his blog for awhile now and not only is he "cool", he also seems down to earth. And if I'm not mistaken, he wrote the scripts for Beowulf and Hell Boy II .
Another feather in his nerdy cap.

The Sandman is what got me into comics. It is wonderful! I highly recommend it.

D'oh! How could I have forgotten that Gaiman also wrote the English-language screenplay for Princess Mononoke?

Love me some Gaiman, Good Omens was fabulous, also other things I can't think of right now...