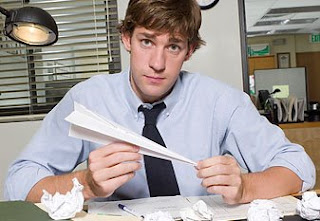 He’s tall. He’s lanky. He’s got hair that has “insouciant” written all over it – which sounds weird but you know what I mean. Yes, he’s John Krasinski, The Park Bench’s Nerd Man of the Month honoree for March. With a flurry of last minute voting, our man John crushed poor Adam Baldwin and left Shatner in the dirt. It was a victory worthy of the man who has come to embody every woman’s dream of The Perfect Office Boyfriend. Plus, he’s worn leather hats with George Clooney. I can think of no finer character reference.

On “The Office,” Krasinski – or as I like to call him, “The Tall Drink of Water Who Slakes Our Thursday Night Thirsts" (TTDOWWSOTNT, for short) – earned our love as Jim Halpert, the man who pined for and eventually won the heart of Jenna Fischer’s Pam Beesley. And given that Pam has more than a hint of the nerd about her, well, that office romance has been a Post-It waving, dancing on the desk-style victory for geeky women everywhere.

When Krasinski’s name was first put on the ballot for Nerd Man of the Month honors, some suggested that perhaps he was too traditionally handsome, too – dare I say it? – sexy to lead the nerd-man charge. If one digs deep enough, though, you’ll find more than enough nerd cred in his CV. For one thing, he’s an Ivy League graduate and holds a degree in playwriting...with honors. I’m betting his dorm shelves were filled with more Mamet than Miller Lite. And he’s written and directed a film adaptation of David Foster Wallace’s Brief Interviews With Hideous Men, which IMDB tells me is due out this year. Honestly, people deserve medals just for finishing Wallace's books let alone adapting them, so we know for sure TTDOWWSOTNT’s pants are of the smarty variety. And if one thing is certain – we nerdy women love the brainiacs. So much so, we forgive them for making movies with Mandy Moore.

For all the sweet gentle humor he brings to “The Office,” for being tall and floppy haired, for his spot-on Dwight Schrute impressions and for being a very smart dude, The Park Bench is pleased to name John Krasinski as its March Nerd Man of the Month.
Posted by Liz at 7:32 AM

I give a whole-hearted HELL YEAH! to the Nerd Man of the Month!!!

Ugh Totally!
I can't get enough of that sexy bitch.

I am so glad John has led me to this site. My inner (and trust me, OUTER) nerd rejoices. :-)

And in case you needed further proof of his inherent dorkness - I give you these:

Yes. There is more than a little bit o' 'B.J. Honeycutt' in that guy, thus tying one of my earliest nerd crushes to my latest, full circle. Thank you, March.

Oh my God! I've totally found my new most favorite-est website ever! My one suggestion - Ed Helms for "Nerd Man of the Month" next time!

Awesome - I voted for him in the poll, and I'm SO glad he won! Back to The Office on April 10!

John is a total nerd.
And that is why I love him!

Yummmm.
That is all.

I'm not really booing - I love John Krasinski like whoa.

Don't worry, bakerloo! There's always April. And I have a good feeling about April for Mr. Oliver.

That sounds like a slogan I could get behind. :-D

Are we prepping a calendar for 2009 based on these results?? Because that baby would sell.

Yikes, mst3kgirl, those are some SERIOUSLY nerdy pics. There's actually a slightly creepy/oddly sexy video clip from that movie (Smiley Face, right?) on YouTube. Search krasinski and shower...just don't do it at work.