Nerd Men of the Month: Stephen Colbert and Jon Stewart 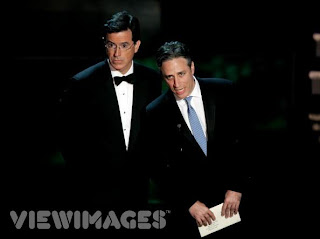 Watching a particular pair of Emmy presenters the other night gave me a big ol' case of nerd love which is why, after counting the ballots in my head and in the heads of many other nerdy women without them even knowing it, I am thrilled to name Stephen Colbert and Jon Stewart as The Park Bench's September Nerd Men of the Month.

Colbert gets the nod not only for his perfect, Cary Grant-like hair -- an achievement in and of itself -- but also because he's created an on-screen persona that is as perfectly crafted as anything Jack Benny or Will Rogers ever did. Pompous, dismissive and always hilarious, the Stephen Colbert of "The Colbert Report" is the perfect antidote to all of the equally ridiculous characters populating today's cable news channels. In an era that seems to have forgotten what real discourse is, it seems highly rational to fight lunacy with lunacy. He also wins the vote because of his brilliant White House Correspondent's Dinner performance a couple years back, being so subtly satiric it hurt...and made you worried he was either going to get audited into eternity or shivved in the parking lot by Margaret Spellings. He's nerdy enough to wield a lightsaber against George Lucas and even makes up his own words, like "truthiness," which pretty much sums up American politics these days. And finally, he gets the glittering, glamorous and yes, imaginary trophy because he has managed to mock the ubiquity of Lance Armstrong-inspired wrist bands with his great "WristStrong" creation while still raising money for returning U.S. troops, proving you can mock and be a nice guy all at the same time.

And we give the other half of this esteemed prize to Jon Stewart because without him there likely would be no "Daily Show," no Stephen Colbert (yes, Jon Stewart is like Colbert's TV womb), no Steve Carell, and most importantly, no "Big Daddy." No, wait, actually Adam Sandler probably still would've made that one without him -- damn it. We give this to Jon Stewart because he and his team present a show that's far more informative than most actual cable news programs, and because he's made politics interesting for millions of young Americans who now know when to be skeptical. He earns the big honor, too, because he and Colbert are two comedians who managed to get the mainstream press to treat them like real reporters and look like idiots in the process. Yes, that means you, Fox News. Besides, who doesn't love a guy who picks a fight with Tucker Carlson? I know I can't resist.

So thank you, Mr. Colbert and Mr. Stewart, for making us laugh when sometimes we just want to cry.
Posted by Liz at 6:32 AM

Ok, all of your Nerd Men choices have been excellent, but this one...well, I've been waiting for you to give more Stewart/Colbert love. If nothing else, what nerd-gal can resist Colbert once she finds out he has Captain America's shield on his set wall and plays D&D?

I've been itching to talk about all the correspondents on The Daily Show because oh boy do I have a big heart on for even Tom Riggle. Man, those men. Sam Bee is cute, too!

I think they are very worthy of the title because they make intelligence sexy.

Colbert and Stewart are love. And I know you guys will agree when I say one of the sexiest things I've heard in a while was when Colbert spoke elvish on Conan O'Brien.

Also, I picked these guys for our Fangirl Centerfold a while back. Check out the last Jon pic. It had to be done.