Nerd Men of the Month: Pegg and Frost

It's a two-fer this month in the Nerd Man category. In celebration of the release of Hot Fuzz on DVD this week, we're giving the vaunted nerd girl seal of approval to English-types Simon Pegg and Nick Frost. At first, I thought about just naming Simon but then that seemed akin to naming just Laurel and not Hardy, Rumsfeld not Wolfowitz, Mary-Kate and not Ashley. Because, simply put, Pegg and Frost are great individually but they're even better together. 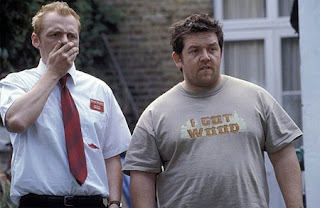 So why all the fuss about these fellows? Well, there about a thousand reasons for the love and they all boil down to this: they're fucking hilarious. Shaun of the Dead, the world's first and best zombie romantic comedy, is a masterwork of gentle parody, flat-out absurdity, genuine gory frights and -- strangely enough -- a true, heartfelt examination of what it means to be a hero to the people you love. Pegg co-wrote Shaun and also plays the lead with a gentle but determined average-guy demeanor. Sure, he's upset that zombies have risen from the dead and are eating people, but he's more upset that his girlfriend's left him and his stepfather's a control freak. Frost plays Pegg's irresponsible best friend whose idea of the perfect day is one spent in the local pub playing video games and doing impressions of the orangutan in Every Which Way But Loose. They're a perfect comic team: Pegg all squirrelly and nervous, Frost all laid back and "chill, dude."

The duo, along with Pegg's writing partner Edgar Wright, proved that Shaun wasn't just a fluke with Hot Fuzz. The film parodies all those Lethal Weapon/Hard Boiled/Bad Boys-style action flicks except they make it, you know, intentionally funny. Here's the preview so you can reminisce over its awesomeness or get your first taste:

Ahhh, that movie makes me very, very happy. As do Pegg and Frost. Plus, seriously, they're action figures. That's a thousand extra nerd points right there. 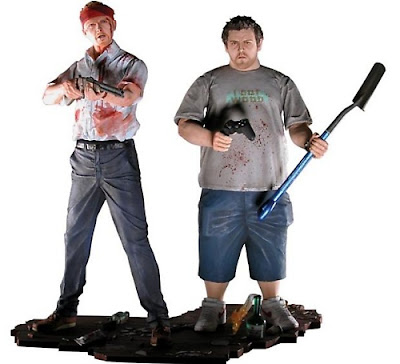 I've still got to check out the TV series they did together called Spaced, but for now Shaun of the Dead and Hot Fuzz have given me all the zombie-loving, comedy-loving, goofball-loving ammunition necessary to decree this duo Nerd Men of the Month for August.
Posted by Liz at 8:47 PM

I have been trying so hard to find Spaced and I just can't. Tell me if you are able to track it down.

I love these guys oh so very much. Also Simon Pegg: SEXY.

Oh dear. Spaced is quite excellent. It's like the comedic stylings of Scrubs (lots of pop culture references and fantasy sequences) only British and for people who don't live in a hospital. Highly recommended, but tricky to find. I think the combination of Amazon and a region-free DVD player might result in great victory though.

Spaced sounds really great. I've seen clips of it on YouTube, but I'm really keen to see the entire series. And bonus points if it's like Scrubs which I used to really enjoy before it got bizarrely stupid. I might just have to invest in that region-free DVD player....

Amazon UK was selling the entire series for something like $26. Of course you have to have a region free player. However, it's well worth the investment!

You also may be able to find it on BBC America Friday nights (after Black Books - Can I nominate Dylan Moran's Bernard Black as next month's "Nerd Man of the Month?")

1. These two prove that nerdiness can make one sexy just as much as singing makes freaky-looking frontmen attractive.

2. Saw John Hodgman on The Daily Show the other day and he looks like he's lost a TON of weight. I hope he's not sick!

I caught a few eps of Spaced on BBC America, and it was quite good. And Shawn is a classic, with just the right "tone" throughout. I'm eagerly anticipating Fuzz on DVD, but I have a question for anyone who has seen it. I've read quite a few reviews that say Fuzz pays serious "homage" to Bad Boys II. Now, I've seen my share of classic American shoot-em-up action movies, but I just couldn't bring myself to watch BBII. Would it seriously kill my enjoyment of Fuzz if I didn't see what they were sending up?

Hey Shan, I've never seen Bad Boys II either and I laughed myself silly through the whole movie, so no, you definitely don't need to suffer through BBII to enjoy Hot Fuzz. If you've seen any of those ridiculous, over the top buddy cop movies, you'll know exactly what they're mocking.

Shaun of the dead action figures! eek! I love it. "Shaun" is awesome!

Spaced is so awesome, so many pop cultures references (Star Wars, Pulp Fiction, X-Files, Buffy).
Shaun of The Dead was born after an episode of Spaced actually.

A word of caution: Once you've seen Spaced, you will lie down and declare them Nerd Men of the Century.

I am absolutely prepared to do that.