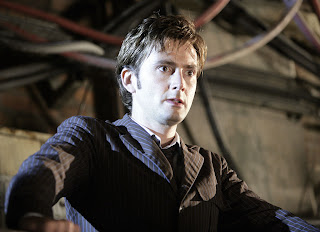 The women of The Park Bench have spoken and by a margin of nearly two to one, Doctor Who’s David Tennant has been voted April’s Nerd Man of the Month. And the best part? He’s just as much of a nerd as the rest of us, judging by his proclamation at the age of three that he wanted to be an actor so he could play Doctor Who when he grew up. I’m betting he has his own action figure – still boxed and everything, that big lovable nerd.

As the tenth Doctor Who, he brings a broody goodness, quiet humor and a certain level of tamped-down and manly squirreliness to the role. This would probably be a good time to admit that my assessment is based on watching a number of YouTube clips and bits from the BBC website – I have not, I am ashamed to admit, watched much Doctor Who, despite the best efforts of numerous friends. I feel, though, that my Wikipedia-ing, YouTube-ing and general gazing upon the visage of Mr. Tennant has been enough to convert me, and I pledge to give the good Doctor a try. Besides, the man’s been voted the most popular Doctor Who by BBC viewers AND he’s got doe eyes. How can I say no to that?

Tennant also earned his nerd street cred with his role as Barty Crouch Jr. in Harry Potter and the Goblet of Fire. And this summer, he’ll star in the Royal Shakespeare Company’s production of “Hamlet” alongside Patrick Stewart, who finished second in our Nerd Man poll. No doubt that disappointing finish will create all sorts of awkward tension backstage with much slamming of dressing room doors and Patrick crying, “I wore a unitard for two seasons. That nerd man honor should have been mine!” and so on. It should be a glorious production and is just another reason why England will always be better than America, what with your sexy actors, universal health care and preponderance of Shetland ponies.

For being the subject of an actual one-woman show entitled, “Not Stalking David Tennant,” for being tall, dark and handsome, for being a nerd and just a genuinely nice guy, The Park Bench is pleased to name David Tennant its April Nerd Man of the Month.
Posted by Liz at 12:14 PM

Just one teeny change in your wonderful description of the beloved Doctor...he's actually the 10th Doctor. The nineth Doctor was played by the wonderful (and most probably nerdy) Christopher Eccleston. He was only in the first season, after which David Tennant took over. Yeah, I know way too much about this. I will confess I wasn't a fan of the show until the 3rd season, but now I'm a Doctor Who freak ...er... enthusiast. :) Set your TiVo's Women of The Park Bench, the new season of Doctor Who comes to the Sci-Fi Channel this Friday, April 18th!

Thank you, Kathe! I fixed the error. I'll definitely check out the new season when it starts. I'm already tuned into Sci-Fi that day for Battlestar, so count me in! :)

What's great is that he's more than just a Doctor Who nerd. He's definitely a Shakespeare nerd. And, in the commentary of an episode of Doctor Who, he references Rhino, the Spider-Man villain. Nerd-tastic!

Yay! Can we just go ahead and save Patrick Stewart for next month? :)

Sigh...I could look at Mr. Tennant all day, but listening to him is even better. You must see The Girl in the Fireplace (a particularly good episode of Who), it was the episode that solidified my love for ten and by extention, Tennant, it's a lovely episode.

Tennant can handle a sonic screwdriver if you know what I mean, wink wink. muahha.

Wait till you see him in his 'brainy specs' as the Doctor. He is the embodiment of adorkable love.

My recommendation for jumping into Tennant episodes is the third-season ep, "Blink," written by another magnificent nerd man, multi-Hugo winner Stephen Moffat. I have hooked many a lass on the show (and the man) by making them watch that. The best part is that you don't need to know squat about the series to enjoy it.

Oh, and among Tennant's adorkable characteristics, you forgot "freckles."

You absolutely must see the episode Doomsday. Tennant is stunning there, absolutely stunning, and it's a heartbreakingly beautiful story.

Taking an opportunity to gloat that I have tickets to see Hamlet with DT and Patrick Stewart. It's gonna be nerd-o-riffic.

And my recommendation for Who eps that really showcase his acting skill is the Human Nature/Family of Blood two parter from S3.

Oh, he's a wonderful choice! Don't watch Doomsday, though, if you haven't seen the rest of the season, it will be so much better after!

He is the definition of adorkable sexiness!

All these episode recommendations sound great. I'm going to have to take a day (or two or three) and really catch up on this.

Also, "adorkable" is a brilliant word. Kudos to the inventor of that one!

And to Anonymous with the Hamlet tickets -- I am extraordinarily jealous. If you'd ever want to write a review of it, I'd love to post it up for everyone to read.

Series two of Doctor Who in general is just brilliant, so do start there.

As someone said, Steven Moffat episodes are great. Aside from series three's "Blink", he wrote "The Girl in the Fireplace" which someone has mentioned.

I'd say start from the first episode of series two anyway, though and work your way through. Girl in the Fireplace is, I think the fourth episode so you don't have too long to wait and chances are you'll be addicted and have to go back and watch anyway!

I got here via LJ.

I have to add to the recs for a first episode. If you're new to the series, I'd say watch either the 2006 Christmas special, the Runaway Bride, or the S3 premier, Smith and Jones. Both episodes are great fun, and give relevant background for new viewers (as well as plenty of Doctor love).

Blink is an incredible episode, but has entirely too little Tennant, IMO. Save it for once you're hooked.

I would start at the beginning of season 3; if you start with season 2, you'll end up just having to backtrack and watch all of season 1 anyway, which is hardly a bad thing, because Christopher Eccleston does a fine job as the Ninth Doctor; it's just that there's too much history between the Doctor and Rose to catch up on. Season 3 lets you start more or less with a clean slate.

Just also wanted to make a note that not one, but TWO Nerd Men of the Month are celebrating birthdays today - Tennant and Conan! We know how to pick 'em, don't we?

Oh, yes. just found your page through LJ, and I think I'll bookmark.

David Tennant. Fab Doctor and all round lovely bloke - People who have met him have nothing but good things to say. And he's a fanboy, which is good. And he looks good in specs. And he has spectacular thighs for a skinny lad.

He's good value in everything he does, catch Blackpool and/or Casanova for extra Tennanty goodness. As for Doctor Who, Girl in the fireplace is wonderful, as it a great ep and he looks totally stunning all the way through. Blink is fab and again I can echo the rec's for the two parter Human Nature/Family of Blood - he is quite quite brilliant.

Wow. I really need a calendar of all these nerdy guys. Can't wait to see who's the face of May!!

Nice choice for Nerd Man! You really can't go wrong with Dr. Who--it's a great series, with something for everyone. The boxed sets are terrific, and the sets for seasons two and three have loads of Tennant-y goodness in the extras (his video diaries should not be missed!) While watching individual episodes is a good way to get the flavor of the show, viewing from the very start of season one allows one to see all the lovely themes, arcs, etc that build as the show goes along, and it's also easier to get the jokes/ references later on.

Season one also gives you Christopher Eccleston (another big, dorky loveable guy); seasons one and three give you the yummy John Barrowman (who cried when he saw his name in the season 3 opening credits), and season three gives you John Simm (who took the role of the Master to make his five-year-old son happy). There are so many good-looking dorky men in this show that you'll be floating on estrogen clouds for weeks!

Let's not forget Casanova!! That is enough to turn anyone into Tennantite! He's gorgeous and...you know ;) What more could a woman want??

Speaking of YouTube, may I recommend Secret Smile? David's performance is fantastic! He's the sort of sociopath I could fall in love with (or just be friends with benefits).
I would also recommend renting David's films as well. If you have Netflix, you can also get your hands on the episode of Foyle's War he guest starred in.
What I wouldn't give to see him in Hamlet and Love's Labours Lost...

Has anyone purchased Conan O'Brien Tickets from the website http://conan-obrien-tickets.doitbigtickets.com/