+ USA Today has a preview of "BSG" alumna Katee Sackhoff's Nov. 23 appearance on "The Big Bang Theory." It sounds like a pretty clever idea, opening the door for future visits.

+ Well, here's a recipe for high-quality cinematic success: take the writers of "Tron Legacy" and have them write a movie about Ouija boards. I hope the end result is as good as when RKO signed Orson Welles to pen that movie about "Go Fish!," originally called "Do You Have Any Sixes?" and then later renamed "The Magnificent Ambersons."

+ Aww, so cute and evil -- check out "The Amazing Adventures of Lil Cthulu." Not only is it adorable in a dark and menacing way, it also taught me how to say "cthulu." It's a win-win!

+ The first footage from the new "Doctor Who" animated special, "Dreamland" has been released. As excited as I was about the initial concept drawings, I can't say I'm 100 percent thrilled with what it all looks like in action. What do you think? (via Blogtor Who)

+ Ever dreamed of combining your love of type and chess? Well, check out this Type Chess Set. (Via InnyM at Twitter) 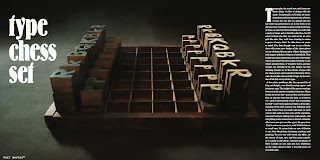 + This cool new exercise treadmill allows runners to trot along with an awesome anti-gravity feeling, something I'd much prefer over the usual "I'm running on pavement and pounding my shins into the ground." It's a little on the pricy side at $24,000 but hey, you can pretend you're running on the Moon. That's worth it, right?

+ And finally, what better way to start your Monday than with Christopher Walken doing a dramatic reading of Lady Gaga's song "Poker Face?"

I found the Dreamland clip somewhat disappointing. I know lots of people really complained about the animation format they used for 'The Infinite Quest', but I preferred that to this style animation for Dreamland.

I've been struggling with the pronunciation of Cthulhu for years. "Their souls make his tummy happy." I love it.

Michele, I'm with you. I just really wish they could have stuck with the Infinite Quest style but actually, you know, animated it fully. I'll take good 2D over shoddy 3D any day. And actually, I guess I'll take shoddy 2D over shoddy 3D too. It always looks okay in still form, but then there's something off with the lipsynch or something.

At first I thought I heard Paul Dobson in that trailer, which takes me back to my ReBoot days. (Speaking of 3D. But that was, um, really innovative for it's time? I hear they're making more, and I don't know how I feel about that...)

I'm not sure why the Beeb went with a different company to make Dreamland (rather than using the same one which made The Infinite Quest).

yeah, definitely not a fan of that animation style. frankly, i would put it on, and listen to it and not watch it at all. it's downright harsh on the eyes. i suppose if it's animated, i want it to be animated one of two ways: like a cartoon/anime so it is visibly 2D or finely tuned like "final fantasy: spirits within" or "appleseed" so it's animation approaching real life that actually looks like it took some skill to produce instead of the disjointed movement that was clearly the product of some overzealous drop-and-drags in an off-the-shelf animation program...