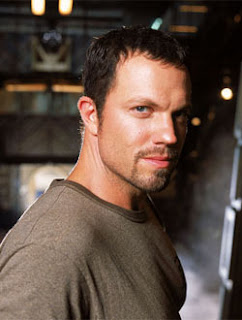 This month’s Nerd Man and I go way back – in the sense that we’ve never met and I just watch him a lot on TV. When I was a kid, one of my favorite movies was called “My Bodyguard,” a movie about a kid who goes to a new school and gets beaten up all the time until he hires the troubled, brooding big guy to protect him. As someone who used to get crammed into lockers on a frequent basis, this movie spoke to me…and it didn’t hurt that the brooding guy was kind of hot. His name? Adam Baldwin. And not only did he continue to be hot, he then started starring in pretty much every good sci-fi show and movie produced in the last 15 years, from “The X-Files,” “Angel” and “Independence Day” to “Firefly,” “Serenity” and now “Chuck.” My friends, he was even in the cheesy TV remake of “The Poseidon Adventure,” in which he ROCKED.

And unlike most people who aren’t animated characters on “South Park,” he looks damn good in an orange knit hat. These are just a few of the reasons why Adam Baldwin has earned August’s Nerd Man of the Month honors.

Baldwin’s not just another pretty face. In fact, he’s not very pretty at all. He looks like an archetypal tough guy, all brawn and scowl. But here’s what makes him different, separating him, so to speak, from the Vin Diesel chaff: he’s pretty damn funny and never more so when he’s uttering the words of Joss Whedon. Baldwin’s 13 episodes as Jayne in Whedon’s “Firefly” left an indelible impression. He managed to make Jayne arrogant, ridiculous, cold-hearted, endearing, dangerous and reluctantly good all at once – sometimes all in one scene. He was the menacing funny guy. Only Jayne could have become a folk hero by running away and accidentally dropping all his stolen cash, making the people of Canton believe he was their Robin Hood. And only Baldwin could have conveyed the utter horror and arrogant pride that Jayne felt when he realized just how much all those Cantonians loved him. In fact, let’s all take a moment and reflect on “The Hero of Canton,” a man named Jayne...as sung by Baldwin:

The thing is, nerds love underdogs, too, and in the world of acting, Baldwin seems like the ultimate underdog. He’s never been a huge star and probably never will be. He’s never headlined a movie or shown up on Perez Hilton’s site. Even in his new series, “Chuck,” where he plays a government agent assigned to protect the geeky title character (flashback to “My Bodyguard?”), he’s rarely center stage but he always, always steals the scene. He’s a guy who seems to just work hard, plug along and quietly entertain the millions of people who secretly know he’s awesome. And in the end, well, that’s a hugely endearing quality.

So please join me in doffing our flappy-eared hats and honoring Adam Baldwin with this month’s Nerd Man title. Now let’s go shoot some space guns! It’s what Jayne would want.
Posted by Liz at 6:09 AM

I clicked over to the site, the pic came up, and I howled like a wolf at the moon.

Not pretty!? No, he's drop-dead handsome. NObody on Angel rocked a business suit like he did.

Awesome! No one wears an orange knit hat like Mr. Baldwin or looks more menacing with a price gun.

He's got charisma and affability which seems rare in actors. Doesn't he look like he'd let you sit at his lunch table without mercilessly teasing you about the unicorn on your Trapper Keeper?

Doesn't he look like he'd let you sit at his lunch table without mercilessly teasing you about the unicorn on your Trapper Keeper?

YES! He's like a bad-ass nice guy. I love that.

And camera obscura, he's definitely handsome. I just meant that he wasn't pretty-boy handsome like so many other guys on TV. He's got the guy's guy thing going on.

He really makes me weak in the knees. He's great in everything he does. He's been in so many great shows, he works hard, and he sure as heck deserves the NMotM!

I'm sending you the bill for my new computer, as my old laptop shorted out when the drool hit the keyboard. You got to love this man, if for no other reason than his Firefly/Serenity quotes. "I just excitable as to choice". "Shiny. Let's be bad guys!" "What're we expectin' to find here that equals the worth of a turd? ".

And to top it off, he went and joined the cast of Chuck, which makes me love him even more

Not pretty? You're kidding right? Adam is the sexiest, most beautiful man on the planet...and with every year he just gets more handsome.

Great choice, especially since he is a bit of a nerd in real life (serious blogging and political research, history buff, internet fanatic etc. as evidenced by his comments and participation on the Firefly prospero forums).

The moment: When he said, "No, sir" and shot the alien in Independence Day.

It has been a steadfast love ever since.

Hah! I knew it was him in Independence Day! Gheesh!

What a very pretty man! And what a very well-written blog! You are very right, the range of love/hate, passive-aggressiveness that he had to pull-off for Jayne was durn near impossible -- and he did it like it was a walk in the park! (Do you think he noticed the park bench?)

OMG! I thought I was the only one with "My Bodyguard" stuck in my brain (doubtless taking up valuable space I should be using for something else -- like my phone number). He should totally get NMotM just for beating up Matt Dillon (while teaching us all Valuable Lessons About Life)!


Just Posted: In Praise of Nerds

He was always my first choice in the tough guy genre, way better than Vin Diesel like you said. Just the best, but I'm glad that he's an actual show regular that seems promising to Mainstream TV (Man-oh-man I wish Firefly came back) but his role as John Casey on Chuck is just awesome.

Thanks for naming him Nerd Man of the Month.

Hubba hubba!
What a man!

And he was awesome in the little-seen TV series "Day Break"!

Adam not handsome?!!? He's absolutely gorgeous. No, he's not a pretty boy, but I like that [GG]. Having those beautiful pale baby blues looking right at you... Woah.

Anyhow, some of us are still hoping he finally gets at least one name above the title movie and an Oscar, stat. 'KTHX.

Plus he's really generous with the fans; takes time, seems to listen with genuine interest and charm [and dry wit...]. He also gives the best hugs EVER [:::smug::: :-)]

I too have been a fan of Adam since watching his brooding, yet heartbreakingly fragile teenager Ricky Linderman. Adam Baldwin does plug along, there will always be a need for the likes of him in movies and television. He's a man's man so to speak, a 'real' man and not like other Hollywood jerks out there. He's not 'pretty,' he's beautiful, from those sharky blue eyes to that hanging jaw and awesome stature, Great blog post!.

Just watched "Safe" last night. The focus was on Simon and River, and Book, but he stole every scene he was in.

He plays a great combo of funny, smarter than he seems (sometimes), and good looking. That would explain everyone in the Whedonverse, however, tho your mileage may vary about the smarter than they seem. Some are as smart as they seem.

And as a staple in sci fi, of course he's a NMofM.

I will not mention his politics.

Great Blog. Adam Baldwin is the best in what ever he does. I adore him and look forward to what he does in every Chuck episode. Love the photo you have of him.