Nerd Men of the Month: The (New) Men of Star Trek (Sorry, Uhura) 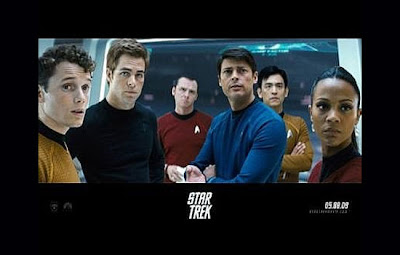 Sadly, Mr. Quinto was getting tweezed during the taking of this photo.
First, I was going to go with Zachary Quinto. And then Chris Pine. And then John Cho, but then what about saucy Mr. Karl Urban as Bones? Choosing one cast member of the new "Star Trek" movie to be Nerd Man of the Month is like trying to take just one potato chip out of the bag when absolutely no one else is there to judge: it just ain't gonna happen. So this month's Nerd Man selection is a whole gaggle of Nerd Men...and in this case, quality and quantity go quite well together.

As we all know, "Star Trek" rocked in innumerable ways, not the least of which was the assembling of a cast that paid homage to the original "Star Trek" actors and characters without miming or mimicking, creating a vibrant new look and feel for a franchise that sorely needed it. Chris Pine as James T. Kirk channeled his inner Shatner with all of the "I'm more awesome than pants"-ness and none of the cloying hamminess that sometimes threatened to turn Kirk from hero into that uncle you're sort of embarrassed by at Christmas. Zachary Quinto as Spock erased every thought of "Heroes" from my brain (thank you!) by building a quietly powerful portrait of a man trying to find the balance between head and heart. As for John Cho, well, what can I say except "sword fight!" Cho made Sulu the bad-ass he's always been and always will be. Simon Pegg, the first two-time Nerd Man honoree in The Park Bench's esteemed and consequently history, brought the funny and the frenetic, crafting the perfect spazzy Montgomery Scott for the ADD generation. And finally, what can you say about Karl Urban except "yowza," a term I believe was first invented by Shakespeare to describe "a dude I've never seen before but hey, he's really hot and funny in that dry way that makes women want to have mixed cocktails and sophisticated conversation with him." Yeah, you know what I mean.

I'm also going to throw Eric Bana into the mix here because the man is the kind of eye candy that makes dentists go rogue. Sure, in "Star Trek" he was covered in mountains of latex but honestly, look at the man sans prosthetic and I think we can all agree he upped the pulchritudinal tally: 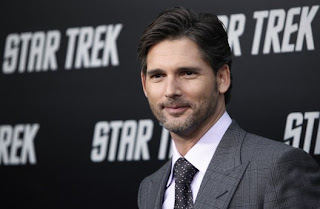 So, for helping resurrect a pop culture icon, for channeling new energy into beloved characters and for generally being able to flex and look good, The Park Bench is pleased to name the cast of "Star Trek" as its Nerd Men of the Month.
Posted by Liz at 4:05 PM

I thoroughly approve of this choice!

Brava! What a wonderful choice... or choices, rather. These boys brought fresh and hot back to Star Trek faster than a whole tray of crescent rolls right out of the oven.

And I'm totally with you about Karl Urban. Mm.

"a whole tray of crescent rolls right out of the oven" should totally be on the movie poster. I love it! :)

Liz, you forgot Anton Yelchin! Who, btw, is excellent in Terminator: Salvation (probably the best actor in the movie, actually).

Also, if you are unfamiliar with Karl Urban, you must go rent the second and third Lord of the Rings movies. LIke, yesterday.

I was totally about to mention Anton Yelchin. I'm glad someone caught it.

Oh damn, I absolutely meant to include Anton Yelchin. I loved him in the movie. Thanks for catching that. I think your endorsements will make up for my omission!

Perfect choice for this month. Those guys were so great. :)

I agree with Alyson, I loved Anton Yelchin, that little boy has talent and dimples- a winning combination.

Speaking of nerdy hotness... I thought John Cho was hot, like WAY hot, back when he was playing Harold.

No, wait, may head would explode (right after my ovaries).

PS. Can I also nominate Leonard Nimoy, if only for his voice? It gives me shivers!

Could this be the new 'chick flick' genre?

I have loved him for a while. You have too, you just didn’t know it. He was Eomer in LotR and the hot bad guy in The Bourne Supremacy.

Ok, that's it. I am totally sneaking out today and going for a third viewing. Don't tell anyone.

My kid tells me the youngun's are all about Chris Pine. I liked him well enough but I worry that he doesn't have that insane presence ( albeit, hammy and ridiculous ) that Shatner brought to Kirk. My Kirk should be larger than life.. Am not sure Mr. Pine qualifies. When I mentioned this to the kid she said " Shatner's a fatty". Kid's got no respect or misunderstand the concept of "larger than life".

I admit, I never watched Star Trek until this movie, largely because I couldn't get past Shatner-as-the-Priceline-guy. (This probably tells you how young I am. Ssshhh.)

But Chris Pine? And Karl Urban? Fantastic reasons to watch. Plus, JJ Abrams is awesome, lens flares and all. Though, I totally think Pine has plenty enough presence for me.... ;)

"because the man is the kind of eye candy that makes dentists go rogue."

I nearly spit my Oreo cookie out on the computer screen. That is awesome.

Oh, I would give so many things to make out with one or all of those men.