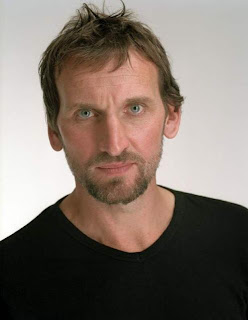 We haven't had many dark, brooding, intense Nerd Men of the Month before so we're taking care of all those adjectives in one fell swoop with Christopher Eccleston. The man is everywhere this month, gaining the best reviews of anyone in the new "Amelia" film and arriving on DVD in the flick, "G.I. Joe: Rise of Cobra." And he's also just been cast in the upcoming film, "The Beautiful Fantastic" with fellow "Doctor Who" alum Carey Mulligan (Sally Sparrow in "Blink"). Also, he appears quite often in my DVD player and the depths of my unconscious. And now he's Nerd Man of the Month for October. It's almost an embarrassment of riches!

Eccleston is well-deserving of universal geek gratitude for helping Russell T. Davies bring the new "Doctor Who" to life. He may not have exhibited quite the fanboy enthusiasm others have in the role -- see "intense"and "brooding" above -- but his performance as The Doctor was simply without flaw. And let's face it, what with the farting aliens and space pigs being thrown in his path, Eccleston's "Who" burden may have been a bit heavier than his successors. He inhabited the role of The Doctor with an incredible energy and the ability to pivot seamlessly between rage, sadness, world-weariness, self-loathing, tenderness and occasionally, sheer unfettered joy. It's an incredible performance and served as the perfect way to usher in an exciting new era of "Who."

Beyond the "Who" realm, the man's just a phenomenal actor. Whether playing the son of God in Russell T. Davies' "The Second Coming" or the dastardly Duke of Norfolk in "Elizabeth" or a hate-filled modern day Iago in "Othello," the guy always gets the job done. Just watch this scene from "Jude," one of the more heartbreaking films you'll ever see, in which Eccleston's stone mason has just been rejected from a university despite his obvious intelligence and gets mocked by, of all people, a student played by David Tennant:

Eccleston possesses quite the nerd genre resume as well with turns in the hugely creepy ghost thriller "The Others," the hungry zombie flick "28 Days Later," a five-episode stint as Claude in "Heroes," and the aforementioned "G.I. Joe," which I intend to get drunk and watch at some point next week.

As with all our Nerd Man honorees, Eccleston just seems like a pleasant, hard-working guy. Even better, he's done loads of charity work for various organizations and is self-depracting enough to make fun of his admittedly unusual but still extraordinary good looks on a regular basis. So, a self-deprecating fellow who helped return "Doctor Who" to the spotlight, who shines in every role he's given and who rocks Elizabethan costuming far more effectively than any man has a right to -- what's not to love? That's why The Park Bench is pleased to name Christopher Eccleston as its Nerd Man of the Month.
Posted by Liz at 11:00 AM

NINE! I love David Tennant, I really do, but you get rather attached to your "first" Doctor, and for me, Nine was it. I loved him in Heroes, too - it's too bad they couldn't work something out to bring Claude back, because that's about the only reason I'd resume watching the show.

I also highly recommend his performance in a little movie called Shallow Grave, co-starring none other than Ewan McGregor. It was his first collaboration with Danny Boyle.

Nice choice for NMOTM. I can't believe he's 45. I think he looks fantastic and he could probably still pull off Hamlet. I just found out he played and invisible guy in Heroes, so I'll have to look up that episode.

Funnily enough, I've just been watching The Empty Child and The Doctor Dances - where he does the very best moments of 'sheer unfettered joy'...

Alyson read my mind--NINE! Oh, how I miss CE as Nine. (I, too, love DT as The Doctor, but Chris was such a *different* doctor from the others. (And worlds apart from the dim early 80s childhood memories I have of Who on PBS...)

He's certainly a different kind of performer, and under-appreciated.

Downloading "Jude" now off BitTorrent. Thank god for BT.... My wife and I will be watching it as soon as it finishes. Wonderful preview.

Joy, be prepared with the hankies. "Jude" is an incredible movie but extremely depressing.

Thank you!!! I absolutely adore Christopher Eccleston. His acting range is so varied and has such depth. He's perfect for the Nerd Man of the Month. Thank you for giving him his due.

Very good choice. As much as I adore David Tennant, NINE was my first Doctor, and I just love him, and sometimes I miss him.
A percect way to end the month with this man as Nerd Man of the month. :)

He pulled of the son of God in Second Coming quite well too. He's fabulous at really depressing roles!

Oh, I adore Christoper Eccleston. It doesn't hurt that we share a birthday...

It's the eyes. There's an intensity in his eyes that just sucks you right in. Excellent choice for NMOTM. Ten will always be 'my' Doctor but that wouldn't stop me from smacking around anyone who dared to diss Nine because Nine was awesome in his own way and I bow to the awesomeness Christopher brought to the role. One season wasn't enough.

Yay! You picked my nomination! :D
I love Christopher Eccleston. Watching him in Doctor Who always brings a smile to my face. Such a dark, brooding, and (yet) adorable man. Thanks for making him Nerd Man of the Month!

Great selection and these are heady times for us CE fans!He is everywhere- and you didn't mention the long awaited New Orleans Mon Amour his movie with Mad Men's Elisabeth Moss has just been released in the US online on iTunes, Netflix etc. And it just became available on DVD (on Demand-they make it as ordered) All Regions from Amazon.com.

Carey Mulligan was definitely a contributing factor to the success of the brilliant "Blink" episode of Doctor Who - I am glad she is working and will watch for this film.

Does anyone know why netflix is offering to let me save Doctor Who Season five on a list of Christopher Eccleston movies? Please, oh, please say it means what I think it means....

Sareberry - we should be so lucky! Clearly Netflix have lost the plot!

I'm not so sure Michele. They've been quite good at keeping track of when Billie Piper or John Barrowman or whoever shows up in past seasons. And there is precedent for doctors meeting up with each other. I'm going to go ahead and keep my fingers crossed. Which will lead to lots of cramps, so netflix had better be right!

Well Matt Smith is playing the lead in Season 5, so I'm not sure why Netflix is telling you it's Chris Eccleston!

Sareberry said...
This comment has been removed by the author.
12:38 PM

Perhaps I should clarify that I am neither hoping Christopher Eccleston's name on the cast list means he is bumping Matt Smith, nor do I think Netflix has advertised such. It simply gives one the impression that there could be a guest appearance by number 9.

I rather imagine Mr Moffat would be rather cross if Netflix are leaking spoilers! Over here there's been hardly any news of who's even WRITING the episodes (besides Moffat) - it's claimed Richard Curtis is penning/has penned one, but at a recent interview, Moffat declined to comment. :( (Frankly the sheer LACK of information about S5 ain't endearing it to me!)

They're not leaking spoilers, there was no news release, I just noticed the credits.

See? Fourth down. I'm probably reading way too much into it, and there will be a goofy montage with past scenes or something, but I'm gonna go ahead and hope, k? Thanks.

Huh! That's a pretty random cast list - Freema, Billie and Catherine as well as Chris? What the HECK do Netflix know that we don't??

Congratulations to Christopher Eccleston on winning "Nerd Man of the Month"! And congratulations to The Park Bench, as well, for having the good taste and great wisdom to choose him for the honor.

Christopher Eccleston is one of the finest actors I've seen on TV or in the movies. And, although David Tennant does a marvelous job, Chris will always be my favorite Doctor Who. But the best showcase for his talent, IMHO, is the movie Revengers Tragedy. If you haven't seen it, do so as soon as possible. He gives an incredible performance in it.

Is my favorite nerd finally getting the attention he deserves? (Although us Eccy fans prefer his own self description - 'gargoyle'!)

Chris is an incredible and seriously underrated actor - luckily for us this is mostly due to him choosing decent scripts to do and so we sometimes don't see him in the things that have you splashed all over Hollywood.

But its better that way, because look at the quality we get with things like Jude, Flesh and Blood, Second Coming etc (and of course Nine!!)

(from the fearless co-leader of the facebook Ecclesnuts, and devotee of the Ears.)

I think NMOTM is my favourite feature, and heartedly agree with the choice of Chris Eccs. The sidebar only lists those up to June though. Glitch, maybe?

My fangirly heart went all cuckoo when I saw this entry. Eccleston was my introduction to Doctor Who, and you never forget your first Doctor. I've been slowly going through his films ever since I started watching DW, and I have yet to be disappointed. Even with G. I. Joe.

This i my first visit to The Park Bench--great blog! I realize this is an old post but it made happy to know CE was NMOTM right before my bday. Such a talented actor and rather nice looking to boot. It's true you never forget your first Doctor. Swoon.