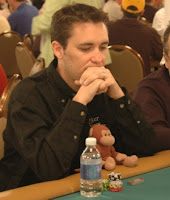 In a way, it's inevitable that someone who wore a unitard on Star Trek: The Next Generation and wrote a book called Just a Geek would make it into the pantheon of Nerd Men of the Month. Beyond his nerd street cred, though, Wil Wheaton earns his Nerd Man honor because of his wickedly funny sense of humor, his deft writing style, his ability to make fun of his Star Trek past while still tipping his hat to its cultural importance and finally, for pioneering the art of blogging. Since the day it began, Wheaton has infused his blog with equal measures of goofiness, pop culture criticism and an intriguing look at what it's like to be a working actor. And damn if I didn't get just a little bit choked up after reading his post about his son graduating from high school. Plus, the guy knows Patrick Stewart (le rowr), starred in Stand By Me, almost single-handedly made Fark famous and is a bad ass Texas Hold 'Em player. Blogger, poker stud, actor, author and smart ass, Wheaton's basically a 21st century Renaissance man. If that doesn't earn a man the title of Mr. June, what will?

Photo from www.pokerstarsblog.com.
Posted by Liz at 9:31 PM

We aim to please!

Oh man, I had SUCH a crush on Wil Wheaton as a 13-year-old nerd-girl Trekkie! Good pick!

Hey, he will always be the king o' geeks!

You should totally interview him.

Such an amazing guy. Good choice!