Nine Out of Ten Cougars Agree: Michael Cera Makes a Fine Nerd Man of the Month 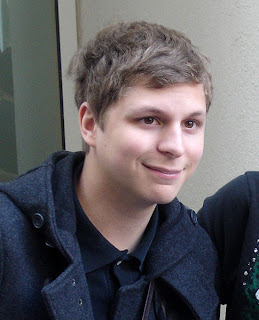 On behalf of all women over the age of 25, I would like to start by saying, "Please God, forgive us for finding Michael Cera adorable. It's entirely your fault for giving him doe eyes. Amen."

And now, with that out of the way and with the merest hint of moral trepidation still resonating in our consciences, the old ladies of The Park Bench are pleased to name Michael Cera -- totally of legal age -- our December Nerd Man of the Month.

So, besides the doe eyes, what earns Cera this prestigious honor, coveted by so many and attained by so few? Well, for one thing, the kid's hilarious. His turn as George Michael Bluth in "Arrested Development" should go down in TV history as one of the funniest deadpan portrayals of teenage awkwardness ever captured on film. George Michael was the heart of that show, a good kid saddled with the most messed up family this side of a Meredith Baxter Birney Lifetime movie. Whatever happened to George Michael -- whether it was his hilariously unfortunate crush on his cousin or the forced bonding with his dad -- you just felt wonderfully sorry for the kid. In any other actor's hands, George Michael could have turned into a miserable little bastard. In Cera's capable hands, George Michael became the most sympathetic character on the show, enduring every unfortunate turn with that sad resigned smile, waiting to see what fresh hell awaited him next.

On the big screen, Cera has made his mark with two terrific performances in "Superbad" and "Juno." Tall and gangly, seemingly uncertain where to put those long arms and legs of his, Cera is the perfect nerd everyman. He's shy but self confident, willing to bend to keep the peace but not above showing those little flares of anger that give a character three dimensions. Watch those two movies one after the other and you'll marvel at the distinctive shades Cera gives each role. I'm telling you right now: the kid's going to win an Academy Award one day. Then again, I never saw the Fresh Prince and Marky Mark nominations coming last year, so what the hell do I know about the Oscars?

Cera wins nerd man honors, too, for the fact that he's a creative force unto himself. Just check out the online TV series he does with Clark Duke, and you'll find a guy still in his teens who can write subtle comedy with the ease and finesse of someone twice his age. Need some persuading? Watch his "Impossible Is the Opposite of Possible" self-help video:

And finally, he's Canadian and you know how much we nerds love the Canadians.
Posted by Liz at 9:53 PM

Thank God I'm not the only mid-twenty-something who's heart is all a twitter when it comes to Michael Cera. I was starting to wonder if I should feel badly about it. He is truly a joy to watch. And he makes anything he's in just that much more enjoyable. It's safe to say he's the apple of my eye. He's just swell. ;D

Michael Cera is the cutest thing ever. He's hilarious and his acting comes so naturally. I just want to give him a hug every time I see his face.

This is just too hilarious, I was just spending an awkward msn moment with a friend trying to explain how I could find Michael Cera so irresistibly cute considering the age and all. Ahhh, thanks for these uplifting words. I once saw him walk around in Toronto...I didn't throw myself at him, I can control it. :)