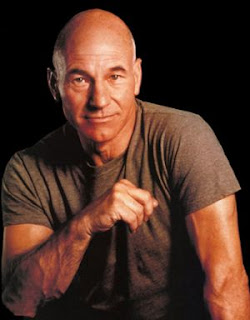 Please forgive me for bypassing the democratic process and going all dictatorial for this month's Nerd Man honors. I just couldn't let another month go by without honoring one of the gods of nerdiness, Patrick "my voice is like soft British butter" Stewart.

There's so much to love about Patrick Stewart. First, check out those biceps! Holy cow, they're like a force of nature! And I bet he makes the "gun show" joke constantly. Oh, also, he's a really good actor. From his role in "I, Claudius," where he rocked a tunic, sandals AND a toupee like a champ to his role as Captain Jean-Luc Picard in "Star Trek: The Next Generation" (aka "the best Star Trek") to his role as Professor Xavier in "The X-Men" films, the guy is a stud of the nerdy genres.

In all seriousness, Stewart deserves kudos for taking the cheese out of "Star Trek" and bringing a much needed gravitas to the role of Picard. He made you care about the Frenchman and the duties he shouldered. (Just an aside, if Picard was French, why did he have a British accent? Does this confirm my suspicion that in the future France will get completely drunk and let England invade with nary a watery burp from the masses?) And anyone with a pulse would have wet themselves just a bit in Star Trek's "Best of Both Worlds" episode when Stewart turned to the camera, all Borg-fied with that little laser light strapped to the side of his head and intoned "I am Locutus of Borg. Resistance is futile." I get a big nerd shiver just thinking about it.

Stewart then went on to do "The X-Men" series of films and continues to do stellar work, most recently appearing on Broadway in "Macbeth." And who doesn't love his "A Christmas Carol" one-man show?

Frankly, it all boils down to the voice. Yeah, he's a good lookin' dude. And yeah, he made bald and middle-aged sexy. But that honey-sweet voice with its deep melodious tone...well, let's face it, nine out of ten women would buy anything that man is selling. Let's all go smoke our cigarettes now, shall we?
Posted by Liz at 11:28 AM

And he and Mr. April David Tennant are starring in "Hamlet"--TOGETHER--this fall with the RSC. Too...much...nerdy...hotness...

I am so excited that he's the Nerd of the Month!!! I love Patrick Stewart I am always telling my friends that if I was older we would totally date! You hit it right on the nose though about the voice, many a night when I was younger I was tucked into bed by that voice (ST:TNG did double features and the second one was always past my bed time so I would plead just to hear the opening before heading up to bed). I'm still upset I missed Macbeth with him, but I hear he's going to do another show next year somewhere in NY and you better believe I'll be there!!

I think that French actually IS dead in the 24th century, hence the British accent.

And let's not forget that he was in David Lynch's Dune, one of my personal favorite nerd franchises.

Anonymous, I can't wait until that production starts. I'm hoping at least a few Park Bench readers will go and share the details!

Washu, this means I don't have to worry about never learning French now, right? That's a relief in case, you know, I'm still around in the 24th century. Me and my cryogenic buddies Ted Williams and Walt Disney!

That is one great picture! I do love him. That voice...makes me speechless! I'm sure everyone knows, but the SciFi Channel is now running ST:TNG on Mondays from 7-11pm ET. It used to be Enterprise, but now we get TNG. My hubby and I stumbled on that last week and about peed with joy! I would kill to see Hamlet at the RSC this fall with David Tennant and Patrick Stewart, but I'll settle for a Park Bench Reader's review if they see it! ;o)

Patrick Stewart is a wonderful choice. I tried Earl Grey tea, just for him. ;-)

I'm sure most of you have seen this already, but......
I could just watch it over and over
:-)
http://www.youtube.com/watch?v=Fg_cwI1Xj4M

Can I just say, I love your blog? And if you can't pick Krasinski every month, well then Captain Picard is a fine choice. (Although I still heart William Shatner as Captain Kirk - does that disqualify me from true discriminating girl nerd-dom? I never did know how to play popular...) I saw Stewart in person when he played opposite Mercedes Ruhl in a production of "Who's Afraid of Virginia Woolf?" at the Guthrie theater in Minneapolis some years back - to be in the same room as "that voice" - oh baby. Get yourself to NYC if you get the chance...

LaurieM, Shatner fans are always welcome here! I love the guy enormously myself. Have you ever read his autobiography (the first one)? If not, you've got to check it out. Both hilarious and hugely entertaining!

I'm very jealous you got to see Stewart in person -- in Who's Afraid of Virginia Woolf no less! I'd love to see him on stage.

Oh my guh. That is a damn fine picture of him. Excuse my drool.

You have my leave to circumvent the democratic process in the future, since CLEARLY, you know what you're doing. :-D

I voted for him over Tennant in April, because I figured he had seniority over my heart. Of course I'm glad Tennant won for April, but it's good to see Picard finally get his Park Bench dues.

I love you so much that errors hurt me - if I ask very nicely, will you change "sandles" to "sandals", which I'm assuming is what you meant?

Great choice! I've seen him 3 times in person--for his one man A Christmas Carol (I listen to the CD every December), in his photo-negative version of Othello in D.C. (organized a road trip specially) and in Macbeth at BAM in Brooklyn before it went to Broadway. I reviewed Macbeth on my blog (http://fashionablylatetotheparty.blogspot.com/2008/03/mac-wha.html) though I mostly wrote about the production and not him, because he's awesome, so what else is there to say?

And I always thought that Picard's accent was because he learned to speak English from a Brit, but then with the universal translator, couldn't everyone just go around speaking their native tongue anyway?

Julia, thank you so much for pointing that out. Sometimes my brain goes phonetic without my permission! Thank you for catching it.

I have been waiting for Patric Stewart's time to shine in Nerd of the Month. Hooray!