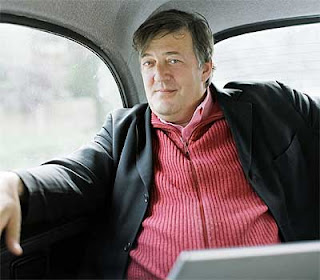 It was a close race but Stephen Fry edged out Greg Grunberg and the men of Top Gear to seize the coveted title of The Park Bench's Nerd Man of the Month. The King of Twitter earns this prestigious (hey, stop laughing) prize for several reasons:

* He's very, very funny. And he's been that way for a very long time. Twenty years ago, I was a big nerdy Fry and Laurie fan and still giggle with foolish pleasure at their absurd and brilliant sketches even when they make me think, "Oh God, that's horrible," as in the case of the sketch below.

* He played Jeeves. And no respectable literary nerd has anything but the deepest love and affection for Jeeves and all who have embodied him.

* He can break entire websites with one mighty Tweet from his Twitterific quiver. Seriously, the man has roughly 7 million followers and manages to entertain each and every one of us pretty much all day long. He's jovial, informative, kindly, appropriately cranky at times and just damn well entertaining.

* He's on "Bones." And we lady geeks love the "Bones" with the science and the Boreanaz.

* He's a novelist. Stephen Fry is a wonderful writer. His first novel, The Liar, has held a cherished place on my book shelf for years. He's written three more since then in between all the other spiffy stuff he's done including traveling to all 50 U.S. states for the BBC.

I could go on and on so let's just summarize here and declare Stephen Fry to be a stellar individual more than worthy of our humble Nerd Man honors. Plus he's very tall and signs his tweets with little x's. Seriously, what's not to love?
Posted by Liz at 7:42 AM

I heartily agree with this choice. I've loved Stephen Fry for over 20 years as well.

Another reason why he's so awesome: QI. By the way, if you go to the website, please sign the petition to get the BBC to broadcast it in the U.S.

*thumbs up* I agree wholeheartedly.

I have to admit, he's in one of my favorite movies, I.Q. as this sort of bumbling straight guy (as in not unintentionally funny... well and hetero... but anyhow). I highly recommend it if only to hear him say "you're my little munchie-munchkin." (And as an added bonus, three old physicists saying "to atoms! those sexy little kinkies!")

Congrats Nerd Man of the Month!

Stephen is some kind of uber-deity, isn't he? Wonderful guy, huge on talent, very kindhearted as well, and yes indeed, a true nerd.

In addition to Jeeves & Wooster, I love him in Blackadder.

Yay! You picked my nominee!

I feel so validated.

Also he is the voice narrating in The Hitchiker's Guide to the Galaxy Movie.