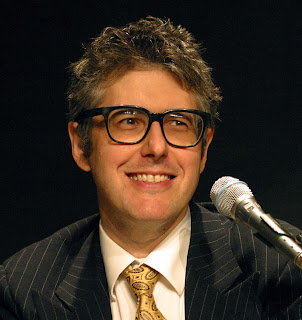 I am thinking gigantic thoughts right now.
There are some people who make you feel smarter just by association. That's why the thousands of people who listen each week to Ira Glass hosting "This American Life" often immediately run off and do "The New York Times" crossword puzzle blindfolded or find a Mensa member to shame in a story problem showdown. Besides boosting our intellectual self-esteem, Glass also exudes likability by being exactly like every smart boy best friend we ever had in high school, the ones who would stay home with us on Saturday nights watching reruns of "The Prisoner" or stand in line with us every time another movie with robots or aliens or preferably both opened.

Glass created "This American Life" in 1995 and has hosted it ever since, including its new-ish incarnation as a TV series on Showtime. For those who have never heard it, "This American Life" is a slice of storytelling bliss. Centered on a different theme each week, the hour-long show features spellbinding true and fictional tales that never, ever fail to grab your attention from beginning to end. Sometimes the stories are funny, sometimes they're odd, sometimes they're sad but they are always of extraordinary quality.

And just imagine, without Glass, the world might have been deprived of David Sedaris. Is that a world we want want to live in? I think not.

Aside from his fine geeky radio voice and the fact that he can rock a pair of spectacles like nobody's business - a trademark of fine nerds everywhere -- Glass is certifiably brainy, having earned a degree in semiotics (yes, I had to look the word up) from Brown University, which is one of those schools with the ivy all over it. Further nerd cred is earned with the fact that he has worked in public radio for 30 years, which is the human equivalent of going to college 400 times. Over the years, he worked as a reporter and host on all the public radio giants including "All Things Considered," "Morning Edition" and "Talk of the Nation."

If you've not seen or heard Glass yourself, here's a taste of his endearingly amiable and laid-back style as he talks with David Letterman about wives, chickens and angry public radio fans:

So, for being a likeable brainiac who enriches our lives with unforgettable stories each and every week and also on Showtime when we can sneak free cable from our neighbors, The Park Bench is pleased to name Ira Glass as its June Nerd Man of the Month.
Posted by Liz at 12:49 PM

I'm an NPR addict, and This American Life is my absolute favorite show of them all. Ira Glass is pretend boyfriend No. 6. I don't have a radio in my house, so I make sure to always go somewhere on either Friday evening or Saturday afternoon (when my local affiliate runs TAL) so I can listen in the car en route.

Oh man, it's so weird to not only put a cute face to a voice that teaches you so much, but to see him in action (not having seen his show before on TV), I think I've got a Professor Crush on Ira Glass now!

I can't believe Ira was not a NMotM before this! He has been my NPR boyfrind for many years now and I even had the awesome pleasure of having drinks with him once after a live show he did at U of Penn (that's what having friends who work at NPR gets you, ladies). A fine, fine selection!

DropEdge, now you have to tell us who pretend boyfriends Nos. 1-5 are!

Cubicalgirl, count us all jealous on the drinks thing. How lucky was that!

Just the other day I was watching the tv show version of TAL online through Netflix and used my facebook status to ponder what it would be like to be married to Ira Glass. Would he deconstruct my life and re-tell it in enlightening ways? Would he pause our conversations in order to play an appropriate song for the background (with Sarah Vowell's suggestions)? Would we have curly-haired babies?

Found your blog linked on Whedonesque and I was hooked after the nerd wooing. Now I am SUPER in love because of this post (glad to know someone else spends a lot of time thinking about Ira Glass). And also? You have a link to Peter Sagal's website! How did I not know he had a website! He is my other imaginary NPR husband. I nearly slid off my seat listening to him on TAL last weekend!

I just noticed you don't have any Radiolab links on here!! Love love love those guys. I nominate Jad Abumrad and Robert Krulwich for Nerd Men of the Month! :)