October Nerd Men of the Month: Bret McKenzie and Jemaine Clement aka Flight of the Conchords 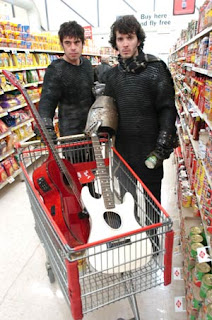 Again, we have a duo, but this duo is also a band. And chicks love guys in bands. The Flight of the Conchords is your new heart-on, Girl Nerds. Bret McKenzie and “Eagle vs. Shark’s” Jemaine Clement obviously do not take themselves too seriously and are willing to look and sound silly, just to delight you. They take unplugged folk music comedy to the next level, (Level II, I think that is) in their savvy HBO show where they play themselves, living in the Big Apple, singing original songs throughout each episode.

Here, Jemaine plays David Bowie appearing to his roommate, bandmate, and best friend Bret in a dream, after trying to help him gain some confidence.

Jemaine and Bret are both good-looking gents who have the ability to make the other one look more attractive. They are a handsome ping-pong game when they stand too close. And just when you thought you’ve seen how hot they can be, with dark hair, smoldering eyes, and guitars in hand, they open their mouths to sing and reveal sexy New Zealand (It’s not in Australia!) accents. The New Zealand (Land of Hobbits and Elves) accent combines the knee-weakening effects of the British timbre with the rebel-twist of an Australian articulation, making every girl nerd, no matter her type, want either Jemaine or Bret to just talk to her. Just…talk. But they’ll do more for you, baby. They’ll sing playful and dynamic comedy folk music, sometimes even rapping to Eminem’s shame. As Jemaine warns in "Hiphopopotamus vs. Rhymenoceros," his rhymes are so potent, he makes all the ladies in the area pregnant.

But that’s OK, because he sounds like he’d be a great boyfriend:

Bravo! Jemaine Clement is the hottest nerd who ever put on black plastic framed glasses.

The New Zealand (Land of Hobbits and Elves)