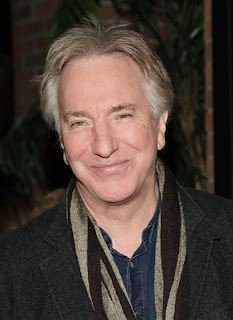 It came down to a Battle of the Alans this month but Alan Rickman and his dulcet tones came out on top. With "Harry Potter and the Half-Blood Prince" opening this Wednesday, now seemed like the perfect time to tip our pointy hats to Rickman and his portrayal of the morally ambiguous but always riveting Severus Snape.

What's not to love about Alan Rickman? He makes villainy scandalously attractive, something that was apparant from the moment he first appeared on screen as the baddie in "Die Hard." A couple years later, he quite literally stole every single scene in which he appeared as the Sheriff of Nottingham in the high-camp classic "Robin Hood: Prince of Thieves." I must have watched that movie 20 times and fast-forwarded through every Kevin Costner scene just to get to another Alan Rickman scene. Yes, I wanted the Sheriff of Nottingham to win, dammit. And then there's Snape. Oh Snape, I know you do bad things but your emo-nature just makes me want to cuddle you like a small, angry kitten with a terrible, terrible dye job. It's truly a testament to Rickman's talents that Snape is one of the few "Potter" characters to feel more three-dimensional on screen than on the page.

And Rickman's not all about the villainy either. The guy can be pretty damn funny. Check him out as one of the has-been actors turned hero in "Galaxy Quest" or as the voice of sad, depressed Marvin the robot in "The Hitchhiker's Guide to the Galaxy" or in one of my favorite Rickman roles, the burned-out cranky neutered angel Metatron in Kevin Smith's profanely hilarious "Dogma."

How about romance? Oh, Rickman can do that too. In fact, when I feel like my day is too sunny and I need to sit in a corner and cry for a good 45-minutes or so, I watch one of his earliest films, an uplifting little number called "Truly, Madly, Deeply" in which Rickman plays a cellist who dies but returns as a ghostly apparition to be with the woman he loves. This film is actually a comedy until it rips your heart out and stomps all over it at the end. It is, thankfully, the anti-"Ghost." And then, for the Jane Austen geeks among us, there is "Sense and Sensibility" which stars Rickman as the mysterious and heroic Colonel Brandon. Did I mention there's a scene where he carries a fevered Kate Winslet through a grassy meadow in a rain storm? Yes. Indeed. Where's my fan? I'm feeling a bit flustered just thinking about it.

Musical theater nerd needs? He's got those covered too, having gone toe-to-toe with Johnny Depp as the menacing yet tuneful Judge Turpin in Tim Burton's "Sweeney Todd." Again, one of those instances where you think, all villains played by Alan Rickman should be given a free pass at redemption. Let him live 'til the credits!

And finally, as if we needed any more reasons to honor the man, there's that voice. I defy anyone not to melt just a little upon hearing the smooth, buttery goodness of that voice. It's so good even "Family Guy" expended a few jokes on it:

So, for giving us an unforgettable Severus Snape, for giving us mysterious heroes, for being deliciously silly when called upon and for having a voice that makes songbirds just give up and die, The Park Bench is pleased to name Alan Rickman as July's Nerd Man of the Month.
Posted by Liz at 12:00 PM

swoon. there's actual steam rising from my computer. thanks for the swell tribute (and hilariously apt description of the emo Snape); there's really nobody sexier than Alan Rickman.

Yey!... Most assertive, and making it most special 'cause this is my birthday month.
But I have to mention that I really got a glipse of his softer side on 'Love Actually', love his acting with Emma Thompson (love her too), that's one of my favorite movies of all time... Anyway, my favorite pick.

Ooh! Good choice! Alan Rickman can come over and read me the phonebook anytime he likes!

Michell, "Love Actually" is one of my all-time favorite movies, too, and I adore Rickman in that. I just couldn't find the right place for it in my write-up. He and Emma Thompson were just terrific in that movie.

Wahoo!! My favorite of all time! I would also mention that he is pretty dishy in Love Actually, but he's had me as an all time favourite since Sense and Sensibility.
Now, can I find someone to stay home with my four year so I can be at the midnight HP premiere this week...

Clap for Alan Rickman. He is a great actor. I fear (just a teeny bit) that for the younger generation he will turn out to be like his Galaxy Quest character where he is only remembered as being Severus Snape in the HP films. He is far too good to be remembered as just one character, though.

I'm with several other commenters on how much I love him in 'Love Actually' - I watch that movie for him, Emma Thompson and Bill Nighy...

I completely agree with your selection. I've been a fan of Alan's since 'Die Hard I' because who doesn't love a baddie with an awesome sense of style?

As hard as I lobbied for Alan Tudyk, I'm happy with Rickman too. Loved him as Col. Brandon and Snape. And that voice....

Red, don't worry. Alan Tudyk has a bright future as a Nerd Man. Glad you like this Alan, too, though! :)

Wonderful tribute, but I have to add his reading on the CD "When Love Speaks"

yum. It is high time for me to watch Truly Madly Deeply again.

And Rickman was the original Valmont in the play Les Liaisons Dangereuses -- which became the movie Dangerous Liaisons. And much as I love John Malkovich in the latter, Alan Rickman would have been so delicious in the role!!!!

Oh, and tragedy of my life -- missing seeing Rickman in the play by one week....

The man that all my nerd girl fantasies center around! Be still my heart! Yes, Alan Rickman. The voice (when he, as Col. Brandon, tells Elinor to give him an occupation "or I will go mad" I just about, well - beyond swoon), the range, the voice, the face, the voice - lucky Emma, lucky Juliet, lucky Kate.
And I can hardly wait until Alan Tudyk is honored!

That article was SO well written. I did not know about the Family Guy thing. That was hilarious!

Thanks for sharing, and yay for Alan this month!

I loved how deliciously silly and evil he was at the same time in Prince of Thieves.

Here here! An excellent choice - anybody who can bring both Snape and Colonel Brandon to life is tops in my book.

Awesome choice! The man is amazing, on so many levels.

Alanfan, Alan Rickman is a great, great actor. Among my many favorites are Something the Lord made and Snow Cake. One of the few that bombed is Bob Roberts.

hear hear! I agree wholeheartedly. Dogma and Galaxy Quest are two of my favourite movies, because of Alan Rickman. Good choice indeed my friend.

In absolute and total agreement with all of the above. And respectfully suggesting that those who haven't see it (and hell, those who have and just want to swoon anew) hunt down the video for the Texas song "In Demand". There's a section in the middle that just does *things* to me and has coloured all time spent in Shell garages ever since.

How is it that even a silent Alan Rickman (no hint of The Voice) can be sexy too?

(note - in Dogma he's an angel and hence neuter, not neutered! That would be a tragedy!)

I have the production script and production diary that Emma Thompson published for SENSE AND SENSIBILITY -- half of it is the screenplay, but the other half is the diary she kept while filming.

She has some entries in there about Alan Rickman which make him sound DELICIOUSLY and GLORIOUSLY snarky.

Have you seen 'Bottle Shock'? He's great in that one, too. Nice Choice!

I have to mention my Father--in-law's favorite movie that starred Mr. Rickman..."Quigley Down Under", in which he plays another fabulous villain.

Wonderful choice! Have loved Alan Rickman since I fell in love with Hans Gruber. Bruce who??? Don't forget him in the wonderful Searching for John Gissing. He was a real hoot in that movie. It really showcased his comedic abilities. He is one of our best actors and absolutely gorgeous to boot. Those eyes...that voice... swoon!!!

Yes! Yes! Frick-ity Yes! I love that man. I watched "Die Hard" just for him originally, then grew to love the whole action genre. And Col. Brandon, "Bad" Harry, the Sheriff of Nottingham, Alexander Dane...is there anything this man can't do?

I must confess, I love Alan Rickman but I just can't swoon over him. It's the teeth, I think.

Major high-fives for including Truly, Madly, Deeply in your review. Any time I need a good cry, I pop it in my VCR (yes, I know!). Then I cleanse my palate with A Room with a View (also on the VCR, ahem). Now I will go hide my face in shame for mentioning the VCR.

Alan Rickman is frequently just about the best thing in any movie he's in!!! I can't pick up a Potter book without hearing his voice in my head!

Let's not forget the creepy sexy performance in An Awfully Big Adventure, and the delightfully silly Blow Dry!