RAG DOLLS AND ROBOTS AND "9"

Remember how I was complaining the other day about the lack of original movies? The upcoming Tim Burton-produced animated feature "9" is helping renew some of my faith in film making humanity. 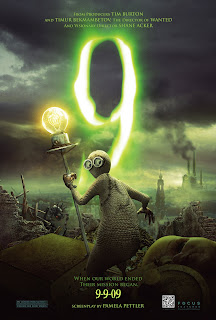 Directed by Shane Acker from his short film of the same name, the movie is set in a post-apocalyptic alternate reality and focuses on a group of rag dolls (zipper fronts and all) who battle machines for the preservation of civilization. It's seems kind of like a traumatizing cross between "Wall*E" and "Terminator" but with 100 percent less Christian Bale. Here's the latest trailer from Trailer Addict:

The marketing folks are having fun with it as well. They've got a Facebook page set up from the point of view of the scientist, which is a nice way to roll out plot and backstory tidbits leading up to the film's release on Sept. 9. Check it out if you have a moment or two.
Posted by Liz at 2:20 PM

Hmm, that looks pretty intriguing. I'd be curious to see more, definitely.

"but with 100 "percent less Christian Bale."

I saw the short film version of 9 a couple of years ago... I'm really interested in how the long one will go.