In honor of Father's Day this Sunday, here's a repost of an '07 Park Bench entry chronicling awesome fictional dads. What good ones am I missing? Let me know in the comments. 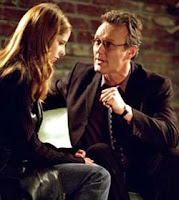 RUPERT GILES / Buffy the Vampire Slayer
You've got to admit it, Rupert Giles is one kick-ass awesome father figure. He suffered traumatic head injury for Buffy at least 400 times, lost his job because he loved his Buffy too much, made out with Buffy's mom when no one else would, made up (not out) with Buffy's boyfriend even after the dude tortured him and killed his girlfriend and finally, showed up just in the nick of time to wear a dead sexy black coat and save the world at the end of Season 6.

JEAN VALJEAN / Les Miserables
You loved him in the musical. You loved him in the 1,200 page unabridged French novel with the inexplicable 150-page mid-section devoted to the history of French nuns. In many ways, Jean Valjean was too good for that whiny Cosette girl. He rescued her from those nasty Thenardiers, he adopted her and protected her through childhood, he carried her sappy, dying boyfriend on his back through the sewers of Paris and was willing to die alone just to protect her from his true identity as an escaped prisoner. Plus, if you believe those Broadway folks, he had a lovely tenor voice. She didn't deserve him.

Wouldn't you love to have seen the parent/teacher conferences for Sydney Bristow? "What do you mean my daughter's cursive is illegible?" Jack shouts, grabbing the language arts teacher by the throat and using lasers to cut his ankles off. Sure, being daddy's little Alias girl was tough what with the mistaken matricide and the brainwashing and the lies and the global conspiracies, but no one can say Jack didn't care: the dude blew himself up for her! And on a side note, Victor Garber has the sexiest ears of all time. I'm very, very serious.

GOMEZ ADDAMS / The Addams Family
Gomez wins the prize for least judgmental dad of all time. Pugsley and Wednesday could blow stuff up, torment their babysitters, and (in the movie) cause anarchy and chaos at summer camp and all Gomez ever did was love them. You gotta admire that. 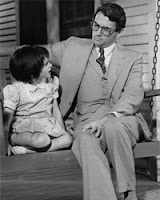 ATTICUS FINCH / To Kill a Mockingbird
It would be impossible to deny Atticus Finch a place on this list -- the guy's got a heck of a resume. The American Film Institute named his character the #1 Greatest Hero of American Film and he was named the 7th Greatest Character in Fiction by some literary bigwigs in 2002. Courageous, moral and honest, he's a brilliant ideal both as a father and as a man.

CLIFF HUXTABLE / The Cosby Show
Cliff Huxtable wins substantial points first, for being funny and second, for making bold sweater patterns work and third, for always having all those cool jazz musicians over for dinner. Hello, Louis Armstrong, would you like some pudding?

JED BARTLET / The West Wing
He may have had his flaws as a father to his own children, but who wouldn't want President Josiah Bartlet as the father of our country? Kind, caring, intelligent with just a pinch of bull-headedness, Jed almost always did the right thing and when he didn't, he went through enough moral self-flagellations to make up for it. And when Josh's father died and he offered to fly home with him even though he'd just won the presidential nomination? Tell me you didn't cry just a little.

GEORGE BAILEY / It's a Wonderful Life
Man oh man, he tried to keep that savings and loan open. He went deaf to save his brother from drowning, he sacrificed his dreams to keep the family business going, he worked night and day to see his fellow townspeople through the darkest days of the Depression. He even kept Zuzu's petals. George Bailey's so good it hurts. 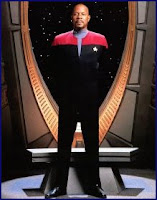 BENJAMIN SISKO / Star Trek: Deep Space Nine
He had a voice that could make me nap, but he was always a good, upright guy, fightin' the aliens and loving his son. He even taught young Jake to love baseball -- five hundred years into the future! Plus, he served as a good example by not killing that little Bajoran woman which would have been the first thing on my space captain to-do list.

JACK BAUER / 24
Remember when you were young and you would boast to your friends that your dad could kick their dad's ass? Yeah, Kim Bauer has us all beat. Talk about the tough guy protector. No matter how many times I've wished Kim would get eaten by a cougar, somehow Jack always manages to come to the rescue, nuclear bombs be damned. Sure, he cut Kim's boyfriend's hand off and inflicted enough psychological damage that she ended up dating C. Thomas Howell (Ponyboy!) but seriously, Jack and that man-purse of his completely rock.

Special thanks to The Park Bench readers who shared their favorites.
Posted by Liz at 11:52 AM

I'd have to put Gibbs from NCIS in there too. He parents all his children Tony, Kate, Ziva, McGee, and daddy's favorite, Abby. He breaks up sibling squabbles with one look (or head slap), demands respect, teaches responsibility and a good work ethic, and gives the very occasional attaboy (sometimes as a gentle kiss on the cheek for Abby). He's also fiercely protective of his brood. He's is also in the my-dad-can-kick-your-dad's-ass category with Jack Bauer in that he's a Marine sniper. The kids never use his first name either.

William Adama. Tough, forgiving, and loyal father and father-figure. Who wouldn't want to call the old man their father?

I can't get past Atticus Finch. He was really perfect.

I would say Papa Winchester (Supernatural) but actually he's a terrible father. Oh, but Bobby Singer! Bobby is the best.

Crone - I can't get past how hot Gregory Peck was, which is to say rather quite a bit!

Keith Mars! how can you forget him?

and Pete Tyler as well
he died for Rose and saved her from the void.

Tom Baldwin,from the 440 comes to mind as well

I've asked my father more times than I care to say if he would kill someone for hurting or annoying me. I blame Jack Bristow's AWESOMENESS. Oh, he was a horrible father for years and years, but he just loved Sydney so much! He TRIED.

cI'd put Antonio Sorentino (from the women of the otherwolrd series) and Jeremy danvers. Antonio doesn't care about Nick's failures as long as he's happy and Jeremy took seven year old werewolf Clay home to live with him.