+ First off, welcome to all the new readers this morning. I'm absolutely tickled pink (which has given me a rare healthy glow) that you guys are enjoying the "How to Woo" list. I hope you'll take a few moments to check the place out and kick the proverbial tires. It's great to have you here!

+ Mo Ryan at the Chicago Tribune did a wonderful interview with David Tennant in conjunction with tomorrow night's BBC America debut of "The Next Doctor," the first of Tennant's last five specials. No, I'm not crying...there's just some dust in the air this morning...really, it's nothing...

+ The new trailer is out for "Amelia," the upcoming flick about Amelia Earhart starring Hilary Swank. I'm not a big Swank fan but I've been looking forward to this movie for a while now -- and not just because it also stars Ewan McGregor and Christopher Eccleston. Okay, a little bit because of that. Anyway, here's the trailer:

+ What a show-off! Vaclav Havel is showing again that he can do just about anything. (Except summersaults. I've heard the man is terrible with his tumbling.) The former playwright and president of the Czech Republic is set to make his directorial debut with a new movie called "Pic," described as "an absurdist look at the life of an ex-politician."

+ And in other Eastern European intellectual news, Jeri Ryan, formerly of "Star Trek: Voyager" will be joining the cast of TNT's "Leverage" playing a con woman. The best part about this item is that the only comments under the story were one, someone typing "no" in all caps for half the page and two, someone advertising "the first and largest cougar mingle site." Okay, then!

+ Den of Geek is showcasing new character posters for "Sherlock Holmes." Shall we perhaps begin our Friday morning with a gazing-upon of Robert Downey Jr.? I think so. 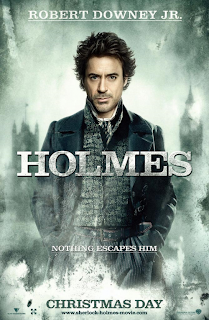 Personally, 10th Doctor was better than 9th for me. At least, more light hearted, yet still the same Doctor inside.

And I am seriously afraid of the Sherlock Holmes movie after watching the trailer.

Oh! I want to see 'Amelia' on the basis of that trailer.

Amey, I'm totally a 10th Doctor fan as well. He'll always be my favorite. But I think Eccleston's a terrific actor as well. I may even - *gulp* - see G.I. Joe because of him.

Gambit, d'oh, I totally forgot to post that Buffy v. Edward clip. Another reader had very kindly e-mailed it to me and I totally forgot. I'm an idiot. Thanks for picking up my slack! :)

The Tennant interview was great! Thanks for the link.

The new Holmes movie though . . . ugh, the trailer looks like it's a movie about some unrelated action-adventure hero improbably named "Sherlock Holmes."

I will, however, take that poster and sneak off to my bunk with it.

9 will always be my Doctor that said I did enjoy Tennant's performance as the Doctor and I'd likely be seeing Amelia even if Christopher Eccleston weren't in it, due to the fact that I am interested in Amelia Earhart. The fact that Chris is in it will make it that much more enjoyable for me.

I wonder if the release date will be late enough in the year to make it obvious that it's aiming to be an Oscar contender.

Found the site through a whedonverse link. Lovely Nerd Girl list. So true..esp #2 and #9.
Johnny Depp in Dark Shadows..I've heard this rumor for years.is it true this time?
Also, I see :shudder: Twillight mentioned here, but no posts on True Blood. Say it ain't so! What does a 173 year old Civil War vet and a highlighted Viking hottie have to do to get some lovin'?

A tip of the hat to the good Doctor. No BBC American in my cable so I'll have to wait until SyFy (sigh) spits the new episodes along with the Torchwood special (Children of Earth).

I really like the 10th doctor. I watched The Next Doctor when it broadcast at Christmas (I was on holiday) but I watched it again tonight so I could see it on my bigger TV. I already have a DVD of it but it is interesting to try and see if they cut anything.

I even found this lovely website because because another Tennant fan mentioned the picture of him which was up the other day (on the geeky girl list).